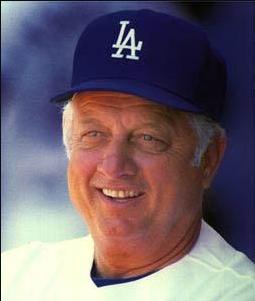 Tommy passed away on January 7, 2021 at the age of 93 in Fullerton, California, USA. Tommy's cause of death was cardiac arrest.

Thomas Charles "Tommy" Lasorda (born September 22, 1927) is a former Major League baseball player who has had a lengthy career in sports management. In 2009, he marked his sixth decade in one capacity or another with the Brooklyn/Los Angeles Dodgers organization, the longest non-continuous (he played one season with the Kansas City Athletics) tenure anyone has had with the team, edging Dodger broadcaster Vin Scully by a single season. He was inducted into the National Baseball Hall of Fame as a manager in 1997.
Lasorda and his wife Jo celebrated their 60th wedding anniversary in 2010. They have resided in Fullerton, California, for more than 50 years and they have two children. They named a gymnasium and youth center in memory of their son, Tom Jr., in Yorba Linda, California on September 7, 1997. He was second born and one of five brothers. His brothers were Edward (deceased), Harry, Morris (deceased), and Joseph (deceased).

In 1991, Tom, Jr. (known as "Spunky") died of complications related to AIDS. Lasorda denied that his son was gay; according to sportswriter Bill Plaschke, he insists his son died of cancer.
On June 3, 2012, at age 84, Lasorda was hospitalized in New York City after suffering a heart attack. The heart attack was not considered to be overly serious.