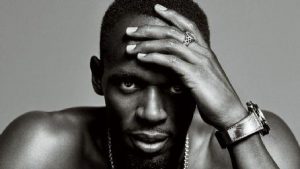 Usain is alive and kicking and is currently 35 years old.
Please ignore rumors and hoaxes.
If you have any unfortunate news that this page should be update with, please let us know using this .

Does Usain Bolt Have the coronavirus?

Usain St Leo Bolt is a retired Jamaican sprinter. He is the first person to hold both the 100 metres and 200 metres world records since fully automatic time became mandatory. He also holds the world record as a part of the 4 × 100 metres relay. He is the reigning Olympic champion in these three events. Because of his dominance and achievements in sprint competition, he is widely considered to be the greatest sprinter of all time.
A nine-time Olympic gold medalist, Bolt won the 100 m, 200 m and 4 × 100 m relay at three consecutive Olympic Games, although he lost the 2008 relay gold medal about nine years after due to a teammate's doping disqualification. He gained worldwide fame for his double sprint victory in world record times at the 2008 Beijing Olympics, which made him the first person to hold both records since fully automatic time became mandatory. Bolt is the only sprinter to win Olympic 100 m and 200 m titles at three consecutive Olympics (2008, 2012 and 2016).

His achievements as a sprinter have earned him the media nickname "Lightning Bolt", and his awards include the IAAF World Athlete of the Year, Track & Field Athlete of the Year, BBC Overseas Sports Personality of the Year (three times) and Laureus World Sportsman of the Year (four times). Bolt retired after the 2017 World Championships, when he finished third in his last solo 100 m race, opted out of the 200m, and pulled up in the 4×100m relay final.
In his autobiography, Bolt reveals that he has suffered from scoliosis, a condition that has curved his spine to the right and has made his right leg half an inch shorter than his left.
Stating that it was his "dream" to play professional association football, in August 2018 Bolt began training with Australian football A-League club the Central Coast Mariners as a left-winger. On 12 October 2018, Bolt scored twice for the team in a friendly match.