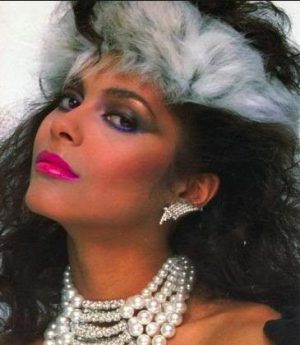 Denise passed away on February 15, 2016 at the age of 57 in Fremont, California. Denise's cause of death was renal failure (after years of drug use).

Vanity Birthday and Date of Death

Vanity was a glamorous Canadian model and lead singer of the all-girl group "Vanity 6". She specialized in playing sultry female characters often in trouble with the law.Vanity was born Denise Katrina Matthews in Niagara Falls, Ontario, Canada, the daughter of Helga Senyk and James Levia Matthews. She was of African-American and German descent. Vanity first appeared on screen in the biographical tale of writer Jack London titled Klondike Fever (1980), before venturing into more gritty territory such as the slasher film Terror Train (1980), the very odd chick flick Tanya's Island (1980), a B-grade martial arts film entitled The Last Dragon (1985) and the totally weird Never Too Young to Die (1986).However, her best two performances were as the naive stripper assisting blackmail victim Roy Scheider in the under-rated thriller 52 Pick-Up (1986) and as a seductive, smart-talking nightclub singer teaming up with cop Carl Weathers to defeat murderous car tycoon Craig T. Nelson in the violent Action Jackson (1988).Unfortunately, the remainder of Vanity's film work was of the "straight-to-video" variety and she only scored minor roles in several low-budget thrillers such as Neon City (1991) and Da Vinci's War (1993). In late 1995, Vanity turned her back on Hollywood and the entertainment industry, and dedicated her life to the Christian faith.Vanity, who suffered from sclerosis encapsulating peritonitis, died on February 15, 2016 in Fremont, California.