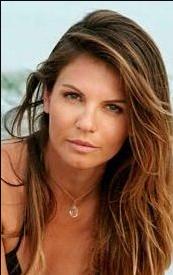 Veronika is alive and kicking and is currently 54 years old.
Please ignore rumors and hoaxes.
If you have any unfortunate news that this page should be update with, please let us know using this .

Véronika Loubry, born on June 22, 1968 in Saint-Brevin-les-Pins ( Loire-Atlantique ), is a television presenter and radio French. Born in Saint-Brevin, seaside resort of the Atlantic coast, she spent her holidays in the farm of her grandparents in Vue, about twenty kilometers west of Nantes. At age 20, she settled in the south of France and became a waitress in St. Tropez 1.
She is discovered by the producer Dominique Cantien, who proposes to him to make TV program. Véronika Loubry began on television in the early 1990s as an announcer on the morning of the Fifth (future France 5). In the mid-1990s, she introduced Star News on M6. Then, after having starred in The Miracle of Love, with Hélène Rollès (1994), she starred in the sitcom Paradis d'enfer in 1997 on TF1. In the meantime, she co-hosts La Mini Fureur on TF1 with Jonathan Lambert 2.

In 1996, Véronika Loubry was Alexandre Debanne's companion, then, from 1997 to 1999, she married the windsurfer Robert Teriitehau. She remarried in 2002 with former footballer Patrick Blondeau, with whom she had two children: a girl, Thylane 4 (in 2001), and a boy, Ayrton (in 2007), so named in tribute to the former pilot of Formula 1, Ayrton Senna. The divorce couple in 2016. Since then, she lives with Gérard Kadoche always on the side of Aix-en-Provence.