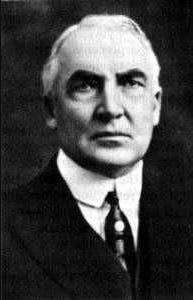 Warren passed away on August 2, 1923 at the age of 57 in San Francisco, California,USA.

Warren Gamaliel Harding was the 29th President of the United States, serving from March 4, 1921 until his death. Although Harding died one of the most popular presidents in history, the subsequent exposure of scandals that took place under him, such as Teapot Dome, eroded his popular regard, as did revelations of an affair by Nan Britton, one of his mistresses. In historical rankings of the U.S. presidents, Harding is often rated among the worst.