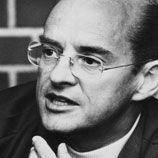 William Gormaly Ball (29 April 1931 – 30 July 1991) was an American stage director and founder of the American Conservatory Theatre (ACT). He was awarded the Drama Desk Vernon Rice Award in 1959 for his production of Chekhov's Ivanov and was nominated for a Tony Award in 1965 for his production of Molière's Tartuffe, starring Michael O'Sullivan and Rene Auberjonois. He was also a noted director of opera.