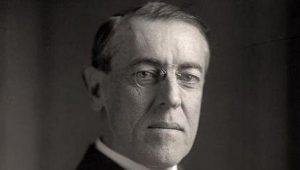 Thomas passed away on February 3, 1924 at the age of 67 in Washington, District of Columbia. Thomas's cause of death was effects of a stroke.

Thomas Woodrow Wilson was an American politician and academic who served as the 28th President of the United States from 1913 to 1921. Born and raised in Virginia, Wilson earned a PhD in political science, working as a professor and scholar at various institutions before being chosen as President of Princeton University, where he worked from 1902 to 1910. In the election of 1910, he was the gubernatorial candidate of New Jersey's Democratic Party, and was elected the 34th Governor of New Jersey, serving from 1911 to 1913. Running for president in 1912, a split in the Republican Party allowed his plurality, just over forty percent, to win him a large electoral college margin. As President, Wilson was a leading force in the Progressive Movement, bolstered by his Democratic Party's winning control of both the White House and Congress in 1912.