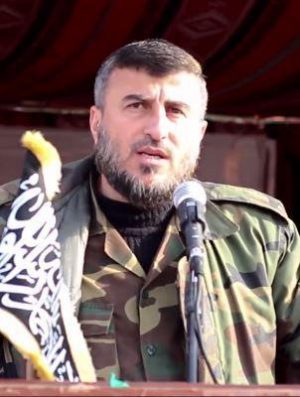 Zahran Alloush (1971 – 25 December 2015) was a Syrian Islamist rebel leader active during the Syrian Civil War. He was the commander of Jaysh al-Islam, a major component of the Islamic Front, of which he was the military chief, and was described as one of the most powerful persons in rebel-held Syria. Alloush called for the cleansing of all Alawites and Shiites in Damascus, later telling Western journalists that these and similar statements had been caused by the pressure and "psychological stress" he was under from living through the Syrian Government's siege of Ghouta. He was reported killed on 25 December 2015 and Essam al-Buwaydhani was named to be his successor.