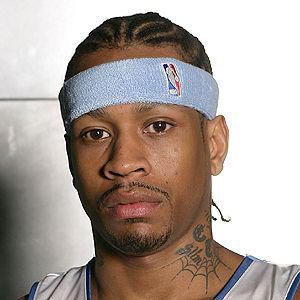 Allen is alive and kicking and is currently 47 years old.
Please ignore rumors and hoaxes.
If you have any unfortunate news that this page should be update with, please let us know using this .

Allen Ezail Iverson (born June 7, 1975) is an American retired professional basketball player who played for four different teams (Philadelphia 76ers, Denver Nuggets, Detroit Pistons, and Memphis Grizzlies) during 14 seasons in the National Basketball Association (NBA). He played both the shooting guard and point guard positions. Iverson was an eleven-time NBA All-Star, won the All-Star game MVP award in 2001 and 2005, and was the NBA's Most Valuable Player (MVP) in 2001.
On October 30, 2013, Iverson announced his retirement from basketball, citing he lost his desire to play. At the 76ers 2013–14 season home opener that night, he received a standing ovation at the beginning of the second quarter. The news conference at which he announced his retirement was attended by former Georgetown coach John Thompson and Sixers great Julius Erving. Iverson said he would always be a Sixer "until I die," and that while he always thought the day he retired would be a "tough" day, he instead stated it was rather a "happy" day.

In November 2013, the 76ers announced that they would officially retire Iverson's number 3 in a special halftime ceremony on March 1, 2014, when the Sixers hosted the Washington Wizards. The ceremony took place in front of 20,000 spectators and 76ers greats such as Julius Erving, Moses Malone, and former team president Pat Croce.
Iverson started dating his high school sweetheart Tawanna Turner when they were 16, and married her at The Mansion on Main Street in Voorhees, New Jersey. They have five children: Tiaura, Allen II, Isaiah, Messiah, and Dream.
On March 2, 2010, Tawanna Iverson filed for divorce, seeking custody of their children, as well as child support and alimony payments. According to Iverson, the couple were back together less than a month after the divorce was finalized in 2013.