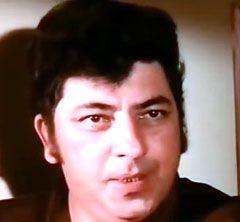 Amjad Zakaria Khan (12 November 1940 – 27 July 1992) was an Indian actor and director. He worked in over 130 films in a career spanning nearly twenty years. He enjoyed popularity for his villainous roles in Hindi films, the most famous being the iconic Gabbar Singh in the 1975 classic Sholay and of Dilawar in Muqaddar Ka Sikandar (1978).