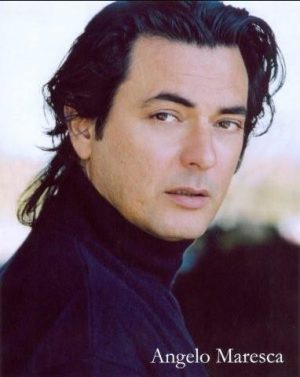 Angelo is alive and kicking and is currently 59 years old.
Please ignore rumors and hoaxes.
If you have any unfortunate news that this page should be update with, please let us know using this .

Angelo Maresca was born in Castelfidardo, Italy, the first born son of Aurturo Maresca, the last Duke of a 10th generation aristocratic family. He has one sister residing in San Francisco and two half brothers in Italy.After boarding school, Angelo served in the Air Force, as an airplane gunner. Following his military service Angelo completed studies and received degrees in both Law and Philosophy at the University of Milan.Angelo abandoned the wealth and the calling of his aristocratic family, to pursue his artistic passions. Preparing him for the arts he completed studies at the Acadammia d' Arte Dramatica di Roma, and the American Conservatory Theater of San Francisco. He fine tuned his English with Robert Easton. He is also fluent in Spanish, and Italian.Angelo's passions have taken him to the far reaches of the world sampling all it has to offer. He has converted these experiences into his characters on film with great appeal. His athletic accomplishments include sailing in the America's Cup for Italy in 1996, along with competitive Horse Back Riding, Tennis, Soccer, Boxing, Motorcycle racing, Dancing, Fencing, and Snow Skiing.Angelo began his acting career in the theater. He has achieved great notoriety in Italy performing the lead role in such productions as 'Henry the IV' , 'A View from the Bridge', 'A Rose Tatoo', 'Hopscotch', 'Un Dio Balbuziente', and In Viaggio con Civetta'.Angleo founded Officina Dell'Arte e Dello Spettacoclo, a theatrical stage production company with Anna Maria Cuzzolaro. This company continues today, providing Rome with some of the finest stage productions in Italy.He is a published novelist, 'L'Avogador e I Delitti della Vera da Pozzo' for which he won the Todi Writers Award for best thriller of the year.An actor turned Director and Producer, he made his film directorial debut in the acclaimed, 'Clochard' for which he won awards in New York, Paris, Spain, Venice and Bulgaria. His producing credits include 'Clochard' along with 'I Terrazzi'. He plans to launch his American film company in 2006.