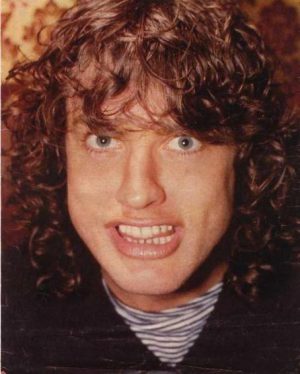 Angus is alive and kicking and is currently 67 years old.
Please ignore rumors and hoaxes.
If you have any unfortunate news that this page should be update with, please let us know using this .

Angus McKinnon Young (born 31 March 1955) is a Scottish-born Australian guitarist best known as a co-founder, lead guitarist, and songwriter of the Australian hard rock band AC/DC. Known for his energetic performances, schoolboy-uniform stage outfits, and popularisation of Chuck Berry's duckwalk, Young was ranked by Rolling Stone magazine as being among the greatest guitarists of all time. In 2003, he and the other members of AC/DC were inducted into the Rock and Roll Hall of Fame.
AC/DC have remained together since their formation in 1973 and have released 15 studio albums. The band have shipped over 200 million albums worldwide, with 70 million certified units in the US. Their 1980 studio album, Back in Black, is accountable for 50 million of those worldwide sales and is the third all-time highest-selling album worldwide.

Young's playing style is influenced by straight blues playing in both the minor and major pentatonic twelve bar blues-type progressions. In AC/DC's earlier recordings, power chords can be heard in songs such as "T.N.T." and "It's a Long Way to the Top (If You Wanna Rock 'n' Roll)". He also utilises touches of Scottish folk in his playing, and pull-off arpeggios (pull-offs, played one-handed) are a popular trick, appearing in songs such as "Who Made Who", "Dirty Deeds Done Dirt Cheap", "Sin City", and "Let There Be Rock" (live).
In 1976, the band recorded an instrumental arrangement of the Scottish traditional song "Loch Lomond", retitled "Fling Thing", which has appeared in their stage act over the years. The title refers to the Highland Fling. Young occasionally provides backing vocals along with Malcolm on songs such as "T.N.T." and "Dirty Deeds Done Dirt Cheap".
Young and his wife Ellen have homes in Australia, the UK and the Netherlands where Mrs. Young is from. Although a heavy smoker, Young is a teetotaler and has been all his life.