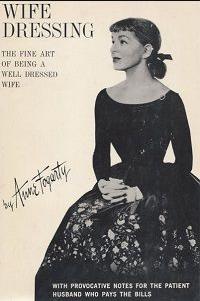 Anne Fogarty was an American fashion designer, active 1940-80, who was noted for her understated, ladylike designs that were accessible to American women on a limited income. She published a style manual in 1959, Wife Dressing: The Fine Art of Being a Well-Dressed Wife, which emphasized femininity, neatness, and always being suitably dressed as desirable qualities.