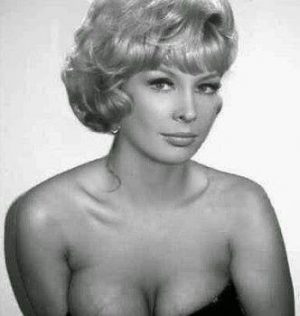 Barbara is alive and kicking and is currently 90 years old.
Please ignore rumors and hoaxes.
If you have any unfortunate news that this page should be update with, please let us know using this .

Does Barbara Eden Have the coronavirus?

Born Barbara Jean Moorhead on August 23, 1931, in Tucson, Arizona, gorgeous Barbara Eden left Arizona and relocated in San Francisco following her parents' divorce and her mother's remarriage. After graduating from high school, Eden attended San Francisco State College, studying singing and dramatics. Upon completion of her studies, Eden relocated to Los Angeles and attempted to break into films. She quickly netted small roles in Back from Eternity and The Wayward Girl (1957; with Marcia Henderson) before signing with 20th Century Fox, where she was under contract for many years. Eden's big break came when she was cast in the TV series How to Marry a Millionaire (1957-1959; with Merry Anders and Lori Nelson). During the run of the series, Eden met and married actor Michael Ansara, in January 1958.
Upon the cancellation of How to Marry a Millionaire, Eden dove into films, starring in A Private's Affair (1959; with Sal Mineo), Flaming Star (1960; with Elvis Presley), and 7 Faces of Dr. Lao (1964; with Tony Randall). In late 1964 Eden shot the pilot for her series I Dream of Jeannie, which was picked up by NBC. By the time that the first season episodes began shooting, Eden discovered she was pregnant. Her son Matthew Ansara was born in August 1965, just weeks before the debut of the series. NBC canceled I Dream of Jeannie in 1970, after 139 episodes.

Eden began a nightclub act and embarked upon a career acting in numerous made-for-TV films, such as The Feminist and the Fuzz (1971; with Jo Anne Worley and Julie Newmar), Guess Who's Been Sleeping in My Bed? (1973; with Dean Jones and Kenneth Mars), and Let's Switch! (1975; with Barbara Feldon). Her theatrically released comedy Harper Valley P.T.A. (1978; with Ronny Cox and Nanette Fabray) proved so popular with audiences that it spawned the short-lived NBC series Harper Valley (1981-1982; with Fannie Flagg and George Gobel). Throughout the 1980s and 1990s, Eden remained a busy actress in films and made-for-TV movies.
Eden's marriage to Michael Ansara ended in 1973, and after a brief marriage in the late 1970s, she remarried again in 1991. Sadly, her son Matthew Ansara died from a herion overdose in 2001. After the death of her son, Eden slowed her acting career, although on occasion she makes television and film appearances. Her most recent film was in the Hallmark Channel romantic comedy Always and Forever (2009; with Dean McDermott and Max Gail). And today she's as beautiful as ever and well worth dreaming about.