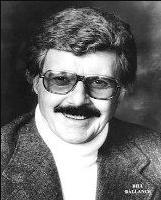 Bill Ballance, 85; Legendary Host of Provocative Radio Talk ShowObituaries September 25, 2004|Dennis McLellan | Times Staff WriterBill Ballance, a groundbreaking Los Angeles radio personality and talk-radio pioneer who was the host of the popular and controversial "Feminine Forum" in the 1970s and various talk shows over the next two decades, has died. He 85.Ballance, who was known for his free-spirited spontaneity, double entendres and one-liners, died Thursday at his home in San Diego. He had been in failing health since June 2002 after undergoing quadruple bypass surgery and suffering a stroke, said his son, Jim. Ballance obituary -- The obituary of radio personality Bill Ballance in Saturday's California section said he was a disc jockey at Los Angeles radio station KFWB-AM (980) until the station switched to an all-news format in 1965. Ballance left the station in 1965, but KFWB did not become an all-news station until 1968.Ballance's provocative "Feminine Forum" was launched in 1971 on KGBS-AM in Los Angeles.Designed for a young female audience, the daily five-hour show featured topics such as "Where did his love go and how did you know it was gone?" "Have you ever thrown yourself at a hunk who wasn't catching?" and "Are you a red-hot mama?"Ballance played the role of what former Times radio columnist James Brown called "the lascivious uncle, chiding his 'doll babies' to rid themselves of their 'grunthead' oppressors."Within a year, Ballance's "Feminine Forum" was one of the most popular radio shows in Los Angeles, with as many men tuning in as women. By turns witty, racy and confessional, the daring program was soon syndicated across the country and spawned imitators in dozens of cities."The 'Feminine Forum' was really the forerunner to [radio's] Tom Leykis and Howard Stern," Don Barrett, executive editor of LARadio.com and author of "Los Angeles Radio People," told The Times on Friday."It was really a breakthrough show," said Barrett. "Bill talked to the women, and he really took their side in whatever conflict they were having with their husband or boyfriend. And he had a little sexual content in there. Nobody did that on L.A. radio prior to Bill, but he did it in a very tasteful way. Certainly, by today's standards, it was very tame."Ballance's mike-side manner drew out intimate personal details from his female callers.A major ingredient to his on-air success was his command of the language."Billo," as he was called, was known to open the phone lines by saying the show would explore "the fragility of love and the constancy of corruption."He had a penchant for a clever, if not corny, turn of phrase: "Many a charming little armful becomes a dreadful little bed-full"; "Marry in haste, repent insolvent"; and "A perpetual indifference means an eventual goodbye."Times staff writer William Trombley wrote in 1975: "His astonishing verbal facility and deep, suggestive voice manage to convey meanings the words themselves do not contain.""It's just a scream," one female Malibu fan of the show told The Times in 1972.But not everyone shared her enthusiasm.Feminist groups accused the program of exploitation and insulting the intelligence of its callers. For his part, Ballance called women's rights activists "professional blind dates."The many imitators spawned by Ballance's success prompted an unexpected backlash."When my show became No. 1, I had over 500 imitators across the nation," Ballance told The Times in 1975, "most of them young 'rock jocks' who couldn't handle these calls of a very personal nature.... I was besmirched by my gross imitators."Indeed, wrote The Times' Brown: "Where the Ballance show had wit, preparation and style, most of the imitators could only accomplish sledge-like raunch."His imitators had crossed the line so much that federal regulators cracked down on what Dean Burch, then-chairman of the Federal Communications Commission, called "topless radio" and "electronic voyeurism.""My show was mentioned by the FCC but not cited," Ballance told The Times. "The verdict came through to the effect that 'The Bill Ballance Show' is not obscene and that was it."KGBS abandoned the "Feminine Forum" in early 1973 but its host remained on the air with a toned-down "Bill Ballance Show."After KGBS dropped its talk format in favor of country music in 1974, Ballance signed with KABC, where he did another milder version of his original show.Ballance created more controversy in the late 1990s when he sold nude photographs of talk-show host Dr. Laura Schlessinger to an Internet company.He had taken the pictures during their romance in the mid-1970s when Schlessinger was a regular on his show. Ballance, who was paid $50,000 by Internet Entertainment Group, reportedly sold the pictures because he had been snubbed by Schlessinger at a Beverly Hills luncheon honoring her. In late 1998, a judge ruled that the 12 nude photos of Schlessinger could be posted again on a website.Schlessinger said at the time, "I am mystified as to why, 23 years later, this 80-year-old man would do such a morally reprehensible thing."Responding to a caller's question on Tom Leykis' radio show, Ballance justified selling the photos.