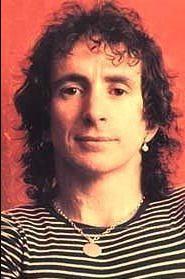 Ronald passed away on February 19, 1980 at the age of 33 in London, England, UK. Ronald's cause of death was acute alcohol poisoning.

Ronald Belford Scott was born on July 9, 1946 in Kirriemuir, Scotland, UK. In 1952, the Scott family relocated to Australia. Bon's strong distaste for authority led him to quit his studies at the age of 15. Bon's earliest musical efforts were both on vocals and drums. His first "real" job in the music business was in a pop band called The Valentines, whose single "Every Day I Have To Cry" reached the top five of the local charts. On September 1969, however, The Valentines were arrested for dope possession which shattered their clean-cut image beyond repair, and the band officially called it quits a few months later. Within six months of The Valentine's dissolution, Bon joined a new blues-rock band called Fraternity; the efforts of the band to achieve some success in Europe were largely fruitless and they returned to Australia slightly disillusioned. After returning home, Bon was involved in a motorbike accident that left him in a coma for three days and in the hospital for several months, ending his association with Fraternity. Now based in Adelaide, Bon was reduced to taking on casual work until the day he was offered the chance to drive the bus for this new and really young rock band called AC/DC around. But Bon harboured ambitions to front the band. He persuaded the Young brothers that the band needed a better frontman and he suggested himself as the ideal replacement. And when former singer Dave Evans failed to turn up for a show, Bon seized his chance. With Bon Scott as a frontman, AC/DC got into sharp focus and the next five and a half years saw them getting more popular with each passing year, ultimately achieving world-wide success with their million-selling "Highway To Hell". The band's legendary status is believed to be largely due to the period spent with Bon Scott as the band's lead singer. Yet Bon Scott was also an excessive drinker and this would ultimately lead to tragedy. After a night of heavy drinking, Bon died in a car parked outside a friend's flat in South London sometime on February 19, 1980. He was prononced dead on arrival at Kings College Hospital. Bon Scott lies in the Fremantle Cemetery's Memorial Garden in Australia.