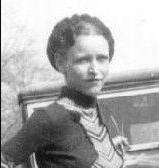 Bonnie passed away on May 23, 1934 at the age of 23 in Bienville Parish, Louisiana, USA. Bonnie's cause of death was gunshot.

Bonnie Parker was an American criminal who was born on October 1, 1910. After meeting Clyde Barrow in 1930, Parker eventually entered a world of crime. Robbing banks and small businesses with her partner and affiliated gang, she became one of America's most infamous outlaws of the '30s.
In June 1932, the court failed to convict Bonnie after she stated she was kidnapped by the Barrow gang, and she was thus released from custody. She immediately rejoined Clyde, and the couple resumed their crime spree with other gang operatives, taking part in robberies that spanned several states. By 1933, the gang was wanted for several murders, including the deaths of various law enforcement officials.

Despite a massive deployment by law enforcement officials that by late 1932 included the FBI, the infamous couple managed to elude authorities and avoid capture for nearly two years, becoming two of America's most well-known outlaws along the way. By early 1934, they were being pursued by a posse that included Texas Ranger captain Frank Hamer.
After the murder of a police officer in Commerce, Oklahoma, by gang member Henry Methvin, Bonnie and Clyde were pursued for weeks. In the morning of May 23, 1934, they drove into an ambush on Highway 154 in Louisiana, and were killed by police in a hail of bullets. The ambush was in fact set up by the father of Methvin, who wanted leniency for his son.
By the time of their deaths, Bonnie Parker and Clyde Barrow were so famous that souvenir-seekers at the scene attempted to make off with locks of their hair, pieces of their clothing and even one of Clyde's ears. Their bodies were eventually returned to Dallas, and despite their wishes to be buried side by side, they were interred in separate cemeteries. Thousands traveled to each of their funerals, with newspapers publishing extra editions to mark the services.