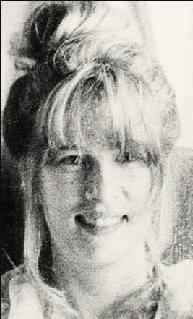 Carlie is alive and kicking.
Please ignore rumors and hoaxes.
If you have any unfortunate news that this page should be update with, please let us know using this .

Carlie Lynn McCummings was a short-term dancer on whom we have scant information. We know that she was not one of the original HOLLYWOOD A GO-GO dancers and probably came onboard the show in mid to late 1965.
After graduating from college in Indiana in late spring of 1965 she was in her car and on the way to follow her dreams in California within a few weeks. Employment as a GAZZARRI followed shortly thereafter in Gazzarri's nightclub. She drifted on over to HOLLYWOOD A GO-GO to appear in several of the later episodes before the show ended.

In 1969 she met Gene Clark from the Byrds and married him in 1970. The Byrds appeared on two episodes (# 30 and the last episode # 58) of HOLLYWOOD A GO-GO and Carlie may have also danced on these shows but we don't know if they had any contact at that time.
We hope that someone can help us solve the mystery as to which dancer she is on the YouTube videos. She currently resides in northern California and works helping women with drug and alcohol dependency problems.