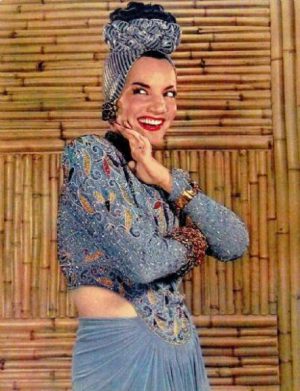 Carmen passed away on August 5, 1955 at the age of 46 in Beverly Hills, Los Angeles, California, USA. Carmen's cause of death was heart attack.

Carmen Miranda, was a Brazilian samba singer, dancer, Broadway actress, and film star who was popular from the 1930s to the 1950s.
Desiring creative freedom, Miranda decided to produce her own film in 1947 and played opposite Groucho Marx in Copacabana. The film's budget was divided into about ten investors' shares. A Texan investor who owned one of the shares sent his brother, David Sebastian (23 November 1907 – 11 September 1990), to keep an eye on Miranda and his interests on the set. Sebastian befriended her, and they began dating.

Miranda and Sebastian married on 17 March 1947 at the Church of the Good Shepherd in Beverly Hills, with Patrick J. Concannon officiating. In 1948 Miranda became pregnant, but miscarried after a show. Although the marriage was brief, Miranda (who was Catholic) did not want a divorce. Her sister, Aurora, said in the documentary Bananas is My Business: "He married her for selfish reasons; she got very sick after she married and lived with a lot of depression". The couple announced their separation in September 1949, but reconciled several months later.
During her later years, in addition to heavy smoking and alcohol consumption, she began taking amphetamines and barbiturates, all of which took a toll on her health.
Miranda performed at the New Frontier Hotel in Las Vegas in April 1955, and in Cuba three months later before returning to Los Angeles to recuperate from a recurrent bronchial ailment. On 4 August, she was filming a segment for the NBC variety series The Jimmy Durante Show. According to Durante, Miranda had complained of feeling unwell before filming; he offered to find her a replacement, but she declined. After completing "Jackson, Miranda, and Gomez", a song-and-dance number with Durante, she fell to one knee. Durante later said, "I thought she had slipped. She got up and said she was outa [sic] breath. I told her I'll take her lines. But she goes ahead with 'em. We finished work about 11 o'clock and she seemed happy."
After the last take, Miranda and Durante gave an impromptu performance on the set for the cast and technicians. The singer took several cast members and some friends home with her for a small party. She went upstairs to bed at about 3 a.m. Miranda undressed, placed her platform shoes in a corner, lit a cigarette, placed it in an ashtray and went into her bathroom to remove her makeup. She apparently came from the bathroom with a small, round mirror in her hand; in the small hall which led to her bedroom, she collapsed with a fatal heart attack. Miranda was 46 years old. Her body was found at about 10:30 a.m. lying in the hallway.