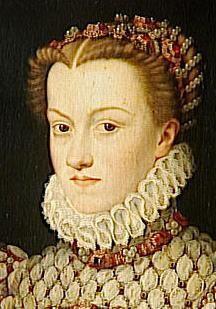 Catherine de' Medici, daughter of Lorenzo II de' Medici and of Madeleine de La Tour d'Auvergne, was a Franco/Italian noblewoman who was Queen consort of France from 1547 until 1559, as the wife of King Henry II of France.
Catherine's three sons reigned in an age of almost constant civil and religious war in France. The problems facing the monarchy were complex and daunting but Catherine was able to keep the monarchy and the state institutions functioning even at a minimum level. At first, Catherine compromised and made concessions to the rebelling Calvinist Protestants, or Huguenots, as they became known. She failed, however, to grasp the theological issues that drove their movement. Later she resorted, in frustration and anger, to hard-line policies against them. In return, she came to be blamed for the excessive persecutions carried out under her sons' rule, in particular for the St. Bartholomew's Day massacre of 1572, in which thousands of Huguenots were killed in Paris and throughout France.

Some historians have excused Catherine from blame for the worst decisions of the crown, though evidence for her ruthlessness can be found in her letters. In practice, her authority was always limited by the effects of the civil wars. Her policies, therefore, may be seen as desperate measures to keep the Valois monarchy on the throne at all costs, and her patronage of the arts as an attempt to glorify a monarchy whose prestige was in steep decline. Without Catherine, it is unlikely that her sons would have remained in power. The years during which they reigned have been called "the age of Catherine de' Medici". According to Mark Strage, one of her biographers, Catherine was the most powerful woman in sixteenth-century Europe.
On 5 January 1589, Catherine died at the age of sixty-nine, probably from pleurisy. L'Estoile wrote: "those close to her believed that her life had been shortened by displeasure over her son's deed." He added that she had no sooner died than she was treated with as much consideration as a dead goat. Because Paris was held by enemies of the crown, Catherine had to be buried provisionally at Blois. Eight months later, Jacques Clément stabbed Henry III to death. At the time, Henry was besieging Paris with the King of Navarre, who would succeed him as Henry IV of France. Henry III's assassination ended nearly three centuries of Valois rule and brought the Bourbon dynasty into power. Years later, Diane, daughter of Henry II and Philippa Duci, had Catherine's remains reinterred in the Saint-Denis basilica in Paris. In 1793, a revolutionary mob tossed her bones into a mass grave with those of the other kings and queens.