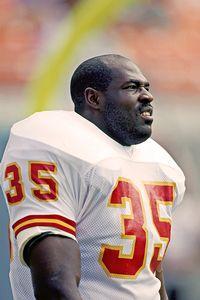 Christian is alive and kicking and is currently 60 years old.
Please ignore rumors and hoaxes.
If you have any unfortunate news that this page should be update with, please let us know using this .

Does Christian Okoye Have the coronavirus?

Christian Emeka Okoye (/ɵˈkɔɪjeɪ/; born August 16, 1961), is a Nigerian-American former American football fullback for the Kansas City Chiefs from 1987 to 1992. Nicknamed "The Nigerian Nightmare," Okoye was known for his powerful running style and ability to break tackles. Okoye's six seasons in the NFL saw a league rushing title in 1989, two Pro Bowl appearances (1989, 1991), and three playoff appearances. He voluntarily ended his NFL career due to multiple injuries.
While growing up in Nigeria, Okoye became good friends with Olympian Innocent Egbunike. When Innocent began attending Azusa he spoke to track and field coaches about Okoye's ability in the discus and they offered Okoye a scholarship on Egbunike's recommendation.

The remainder of Okoye's career was marked by a nagging knee injury, one which limited him to 805 yards and a 3.3 yard average per carry in 1990. Though his 1991 performance (1,031 yards, 4.6 yards per carry) earned him his second Pro Bowl appearance, Okoye's carries in 1992 were largely limited to goal-line situations.
Okoye retired as the Chiefs' all-time rushing leader, having amassed 4,897 yards, 1,246 attempts, and 14 games with at least 100 yards rushing, in his six seasons. Those team records have since been surpassed by Priest Holmes. His 40 career rushing touchdowns as a member of the Chiefs trail only Holmes and Marcus Allen. His Chiefs records for carries in a game and rushing attempts in a season were surpassed by Larry Johnson. Okoye was the team MVP in 1989, and was enshrined in the Chiefs Hall of Fame in 2000.
Okoye married his college sweetheart Lauren Brown in 1990, and divorced in 1996. They had two children together, Michael Emeka Okoye born July 12, 1990, who died shortly after birth due to neonatal asphyxia, and Tiana Chinwe Okoye born August 26, 1991.