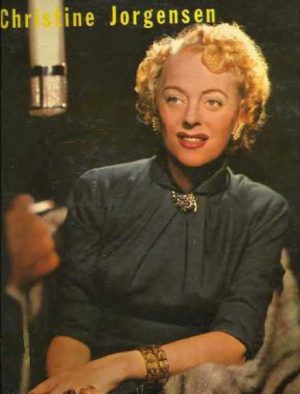 Christine passed away on May 3, 1989 at the age of 62 in San Clemente, California. Christine's cause of death was lung and bladder cancer.

Christine Jorgensen (May 30, 1926 – May 3, 1989) was an American trans woman who was the first person to become widely known in the United States for having sex reassignment surgery. Jorgensen grew up in the Bronx, New York City. Shortly after graduating from high school in 1945, she was drafted into the U.S. Army for World War II. After her service she attended several schools, worked, and around this time heard about transitioning surgery. She traveled to Europe and in Copenhagen, Denmark, obtained special permission to undergo a series of operations starting in 1951.