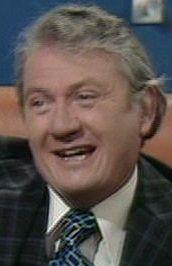 Derry is alive and kicking and is currently 87 years old.
Please ignore rumors and hoaxes.
If you have any unfortunate news that this page should be update with, please let us know using this .

Derry Power (born 1935) is an Irish actor born in Dublin. He is best known for playing management genius Seamus Finnegan in the BBC Television sitcom The Fall and Rise of Reginald Perrin, with the classic line "Would you be having a joke there with a simple, tongue-tied Irishman from the land of the bogs and the little people?". In a long stage career he has featured in many plays in the Abbey Theatre; he has appeared in TV series from Z-Cars to Ballykissangel and in many films made in Ireland.