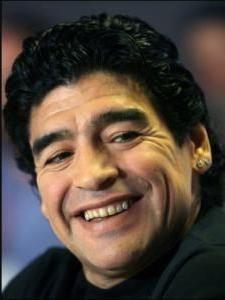 Diego passed away on November 25, 2020 at the age of 60 in Tigre, Buenos Aires, Argentina. Diego's cause of death was heart attack.

Diego Armando Maradona was born on October 30, 1960, in Buenos Aires, Argentina. Maradona led club teams to championships in Argentina, Italy and Spain, and famously starred for the Argentinean team that won the 1986 World Cup. However, the soccer legend's career was marred by a pair of high-profile suspensions for drug use, and he has often battled health problems in retirement.
Diego Armando Maradona was born at the Policlínico (Polyclinic) Evita Hospital in Lanús, Buenos Aires Province, but raised in Villa Fiorito, a shantytown on the southern outskirts of Buenos Aires, Argentina, to a poor family that had moved from Corrientes Province. At age eight, Maradona was spotted by a talent scout while he was playing in his neighbourhood club Estrella Roja. He became a staple of Los Cebollitas (The Little Onions), the junior team of Buenos Aires's Argentinos Juniors. As a 12-year-old ball boy, he amused spectators by showing his wizardry with the ball during the halftime intermissions of first division games.

From the mid-1980s until 2004, Maradona was addicted to cocaine. He allegedly began using the drug in Barcelona in 1983. By the time he was playing for Napoli, he had a regular addiction, which began to interfere with his ability to play football.
Maradona has a tendency to put on weight and suffered increasingly from obesity, at one point weighing 280 lb (130 kg). He was obese from the end of his playing career until undergoing gastric bypass surgery in a clinic in Cartagena de Indias, Colombia, on 6 March 2005. His surgeon said that Maradona would follow a liquid diet for three months in order to return his normal weight.
On 29 March 2007, Maradona was readmitted to a hospital in Buenos Aires. He was treated for hepatitis and effects of alcohol abuse and was released on 11 April, but readmitted two days later. In the following days, there were constant rumors about his health, including three false claims of his death within a month. After transfer to a psychiatric clinic specialising in alcohol-related problems, he was discharged on 7 May. On 8 May 2007, Maradona appeared on Argentine television and stated that he had quit drinking and had not used drugs in two-and-a-half years.
He named Brazilian playmaker Rivelino and Manchester United winger George Best among his inspirations growing up.