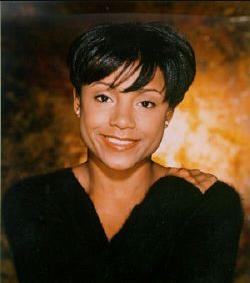 Dominique is alive and kicking and is currently 45 years old.
Please ignore rumors and hoaxes.
If you have any unfortunate news that this page should be update with, please let us know using this .

Dominique Margaux Dawes (born November 20, 1976) is a retired American artistic gymnast. Known in the gymnastics community as 'Awesome Dawesome,' she was 10-year member of the U.S. national gymnastics team, the 1994 U.S. all-around senior National Champion, a three-time Olympian, a World Championships silver medalist and a member of the gold-medal winning "Magnificent Seven" at the 1996 Summer Olympics. Dawes is also notable as being the first African-American woman to win an individual Olympic medal in artistic gymnastics, and the first black person of any nationality or gender to win an Olympic gold medal in gymnastics.
She is also one of only three female American gymnasts, along with Muriel Grossfeld and Linda Metheny-Mulvihill, to compete in three Olympics and was part of three Olympic medal-winning teams: Barcelona 1992 (bronze), Atlanta 1996 (gold), and Sydney 2000 (bronze). Dawes is the first female gymnast to be a part of three Olympic medal winning teams since Lyudmila Turischeva won gold in Mexico City (1968), Munich (1972), and Montreal (1976). Since Dawes, Svetlana Khorkina is the only gymnast to accomplish this feat, winning silver in Atlanta (1996) and Sydney (2000) and bronze in Athens (2004).

Dawes was born in Silver Spring, Maryland on November 20, 1976 to Don and Loretta Dawes. She has two siblings; an older sister, Danielle Dawes-Thompson, and a younger brother, Don Dawes, Jr., both participated in the Olympic games.
Shout out from Broad City S3 E1 Opening scene is a bakery named "Dominique Däas Bakery" that pioneered the Churron. (combination churro/macaron) Dawes' flipping ability has been used as the root metaphor in hip-hop songs by such artists as Ras Kass ("It's a Given," "12"), The Hit Squad ("International," "Zero Tolerance"), Janelle Monáe ["Tightrope (Wondamix)" featuring B.o.B and Lupe Fiasco], Cam'ron (featuring Beyonce and Jim Jones – Do It Again) and Lil Wayne's Stunt Hard.