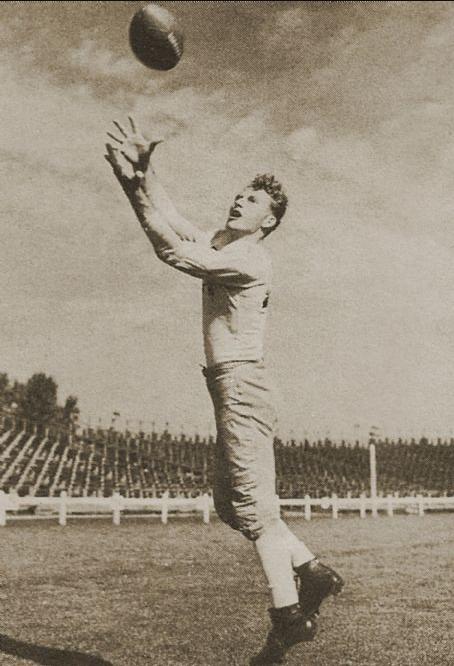 Donald Montgomery Hutson was the first star wide receiver in NFL history. He is credited with creating many of the modern pass routes used in the NFL today. He is credited as the first to use the buttonhook, z-out, hook and go and countless other routes that have become staples of offensive football. Along with Jerry Rice, he is widely considered the greatest wide receiver in NFL history.The All American played at University of Alabama with teammate Paul "Bear" Bryant at the other end position. The Crimson Tide team won the Rose Bowl in 1935 beating Stanford 29-13 with Hutson catching 6 passes for 165 yards and two touchdowns.He joined the Green Bay Packers in 1935. Legendary coach Curley Lambeau wanted to isolate Hudson away from the defense by splitting him out away from the formation. Hense, the term "split end".His first season Hutson scored his very first touchdown on an eighty-three yard pass from Arnie Herber. Many historians refer to this as, "the play that forever changed the game." In his eleven subsequent seasons, Hutson captured 18 major NFL receiving records. He had 488 receptions, by far the most productive of his era, and one of the most productive of all time. Don also led the league in scoring 5 consecutive and 8 seasons overall.When he retired in 1945, he had 99 receiving touchdowns, a record that would stand for 44 years when Seahawk Steve Largent caught his 100th and last NFL TD.As did almost all players in his day, Hutson played both offense and defense. On defense, Hutson was a very good safety who intercepted 30 passes over the final 6 years of his career. Hutson's highest season total was in 1943, when Hutson intercepted 8 passes in only 10 games. For many of his 11 seasons, Hutson was also the kicker for the Packers. He added 172 extra points and 7 field goals for another league record, 881 points.In 1999, he was ranked number 6 on The Sporting News' list of the 100 Greatest Football Players, the highest-ranking Packer and the highest-ranking pre-World War II player.The Green Bay Packer retired his #14. He was a charter member of the Pro Football Hall of Fame.