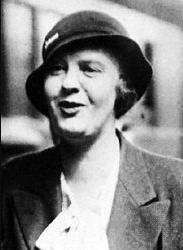 Dorothy passed away on January 31, 1961 at the age of 67 in Lisbon, Portugal. Dorothy's cause of death was heart attack.

Dorothy Thompson was an American journalist and radio broadcaster, who in 1939 was recognized by Time magazine as the second most influential woman in America next to Eleanor Roosevelt. She is notable as the first American journalist to be expelled from Nazi Germany in 1934 and as one of the few women news commentators on radio during the 1930s. She is regarded by some as the "First Lady of American Journalism."