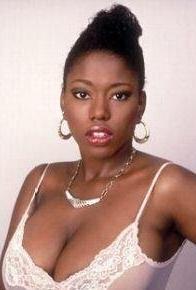 Ebony is alive and kicking and is currently 60 years old.
Please ignore rumors and hoaxes.
If you have any unfortunate news that this page should be update with, please let us know using this .

Does Ebony Ayes Have the coronavirus?

Ebony Ayes is an American adult movie star who was born on January 28, 1962. She is a retired American adult model. With Jeannie Pepper, Purple Passion and Heather Hunter, Ayes was among the first African-American women to "cross over" into mainstream adult video.
Ayes, who was raised in Southern California, was a veteran of numerous men's magazine photo spreads when she made the plunge into adult movies in 1985. Ayes was also one of the original pioneers of black stars entering the world of mainstream adult movies, and was best known for her curvaceous, precedent-setting hourglass figure, as well as her frequent performances with former Black male porn legend Ray Victory. She reached the height of her career in the late 1980s and early 1990s.

Ayes began her film career in 1985. From 1987 to 1989, the period during which she was most active, Ayes made more than 110 original films — 56 in 1988 alone — but by the early 1990s she was appearing in fewer than 5 films a year.
Beside her film appearances, Ayes was a model in men's magazines. She was especially popular in magazines featuring large-breasted women, such as D-Cup, Score, and Juggs. Ayes was also featured in magazines that cater to Black men, such as Players and Black Tail.
After leaving the adult film industry in 1996, Ayes worked as a dominatrix in Atlanta, Georgia. She also performed occasionally as a dancer at strip clubs on the East Coast of the United States.