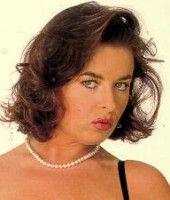 Effie is alive and kicking and is currently 54 years old.
Please ignore rumors and hoaxes.
If you have any unfortunate news that this page should be update with, please let us know using this .

Effie Balconi is a German adult model who was active in the 1990s.
Effie is a mystery - no one has seemed to nail down exactly who she is. First off it's reported she's Brittish, other times it's reported she's German which is true. Sometimes she's reported as Maren Beautte ,which she isn't, and sometimes as Effie Marconi (which she is, along with Effi Buster, Effie Dubois, Effi Flimmers, Effie Mota, Steffi and Suzie). Some report she was only active in the industry in 1996 and some report she is still active which she isn't.

Born in Munich, Germany, Effie is a big busted hairy woman that started doing adult movies in 1989 in Germany. She pretty much spent her whole career in Germany doing movies until about 1993. She disappeared for three years and returned in 1996 to work for Scoreland. She made a few movies for them and appeared in the magazines quite a few time. She was always overshadowed by her countrywoman Chloe and never really got the stardom she deserved.