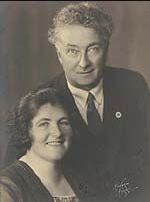 Dame Enid Muriel Lyons AD, GBE (née Burnell; 9 July 1897 – 2 September 1981) was an Australian politician and the first woman to be elected to the Australian House of Representatives as well as the first woman appointed to the federal Cabinet. Prior to these achievements, she was best known as the wife of the Premier of Tasmania and later Prime Minister of Australia, Joseph Lyons.