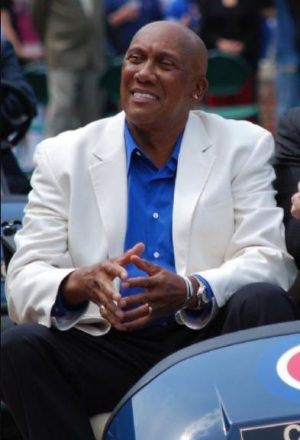 Ferguson is alive and kicking and is currently 79 years old.
Please ignore rumors and hoaxes.
If you have any unfortunate news that this page should be update with, please let us know using this .

Does Ferguson Jenkins Have the coronavirus?

Ferguson Arthur "Fergie" Jenkins, Jr., CM (born December 13, 1942) is a Canadian former professional baseball player. He was a Major League Baseball (MLB) pitcher for the Philadelphia Phillies, Chicago Cubs, Texas Rangers, and Boston Red Sox, from 1965 through 1983. He also played basketball in the off-season for the Harlem Globetrotters from 1967 to 1969, and pitched two seasons in Canada for the minor league London Majors following his major league career. In 1991, Jenkins became the first Canadian to be inducted into the National Baseball Hall of Fame.
Jenkins ran for the Ontario Liberal Party in the 1985 Ontario general election, in the riding of Windsor—Riverside, but placed third behind the NDP's Dave Cooke.

Jenkins led the league in wins twice, (1971, 1974) fewest walks per 9 innings five times, complete games nine times, and home runs allowed seven times. He led the league in strikeouts once (1969, with 273). His streak of six straight seasons with 20 or more wins (1967–1972) is the longest streak in the major leagues since Warren Spahn performed the feat between 1956 and 1961.
Jenkins, fellow Cub Greg Maddux, Curt Schilling, and Pedro Martínez are the only major league pitchers to ever record more than 3,000 strikeouts with fewer than 1,000 walks. Only Robin Roberts and Jamie Moyer allowed more home runs over a career than Jenkins. Jenkins achieved his 3000th strikeout on May 25, 1982 against Garry Templeton.
He is considered the anchor of the 12 Black Aces, a group of pitchers with at least twenty wins in one season.