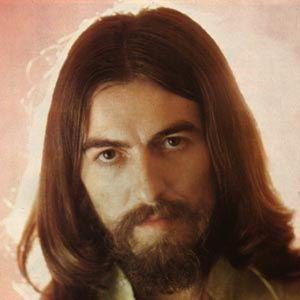 George passed away on November 29, 2001 at the age of 58 in Hollywood Hills, California, USA. George's cause of death was lung cancer.

George Harrison was lead guitarist of the Beatles as well as a singer-songwriter on many of their most memorable tracks. Born on February 25, 1943, in Liverpool, England, George Harrison formed a band with schoolmates to play clubs around Liverpool and in Hamburg, Germany. The Beatles became the biggest rock band in the world, and Harrison's diverse musical interests took them in many directions. Post-Beatles, Harrison made acclaimed solo records and started a film production company. He died of cancer in November 2001.
In 1997, Harrison was diagnosed with throat cancer; he was treated with radiotherapy, which was thought at the time to be successful. He publicly blamed years of smoking for the illness.

On 30 December 1999, Harrison and his wife were attacked at their home, Friar Park. Michael Abram, a 36-year-old man, broke in and attacked Harrison with a kitchen knife, puncturing a lung and causing head injuries before Olivia Harrison incapacitated the assailant by striking him repeatedly with a fireplace poker and a lamp. Abram suffered from paranoid schizophrenia, believing that Harrison was an extraterrestrial and that the Beatles were witches from Hell who rode broomsticks. During the attack, Harrison repeatedly shouted "Hare Krishna" at Abram. During the trial, a psychiatrist testified that Abram told him he would have stopped the attack if Harrison had talked normally to him. Following the attack, Harrison was hospitalised with more than 40 stab wounds. He released a statement soon afterwards regarding his assailant: " wasn't a burglar, and he certainly wasn't auditioning for the Traveling Wilburys."
In May 2001, it was revealed that Harrison had undergone an operation to remove a cancerous growth from one of his lungs, and in July, it was reported that he was being treated for a brain tumour at a clinic in Switzerland. While in Switzerland, Starr visited him but had to cut short his stay in order to travel to Boston, where his daughter was undergoing emergency brain surgery, prompting Harrison to quip: "Do you want me to come with you?" In November 2001, he began radiotherapy at Staten Island University Hospital in New York City for non-small cell lung cancer which had spread to his brain.
When the news was made public, Harrison bemoaned his physician's breach of privacy, and his estate later claimed damages.
On 12 November 2001 in New York, Harrison, Starr and McCartney came together for the last time. Less than three weeks later, on 29 November 2001, Harrison died at a friend's home in Los Angeles, aged 58. He was cremated at Hollywood Forever Cemetery and his funeral was held at the Self-Realization Fellowship Lake Shrine in Pacific Palisades, California. His close family scattered his ashes according to Hindu tradition in a private ceremony in the Ganges and Yamuna rivers near Varanasi, India. He left almost £100 million in his will.
Harrison's final album, Brainwashed (2002), was released posthumously after it was completed by his son Dhani and Jeff Lynne. A quotation from the Bhagavad Gita is included in the album's liner notes: "There never was a time when you or I did not exist. Nor will there be any future when we shall cease to be." A media-only single, "Stuck Inside a Cloud", which Leng described as "a uniquely candid reaction to illness and mortality", achieved number 27 on Billboard's Adult Contemporary chart. The single "Any Road", released in May 2003, peaked at number 37 on the UK Singles Chart. "Marwa Blues" went on to receive the 2004 Grammy Award for Best Pop Instrumental Performance, while "Any Road" was nominated for Best Male Pop Vocal Performance.