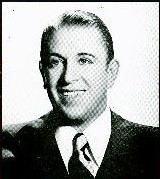 George Edward Olsen, Sr. (March 18, 1893 - March 18, 1971) was an American band-leader. Born in Portland, Oregon, he played the drums and attended the University of Michigan, where he was drum major. Here he formed his band, George Olsen and his Music, which continued in the Portland area. He then made the cross-county transition to Broadway, appearing in Kid Boots, the Ziegfeld Follies of 1924, and Good News.