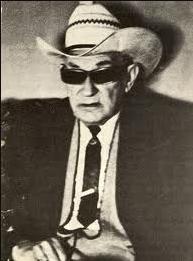 George Spahn (February 11, 1889 – September 22, 1974) was a rancher who once owned the Spahn Ranch near Chatsworth, Los Angeles, California. Spahn (as did previous owner William S. Hart) rented the ranch to the movie industry to film Westerns. At the ranch, he housed Charles Manson and his followers. The 1969 murders of actress Sharon Tate and six others by Manson's devotees were allegedly hatched at the Spahn Ranch. Manson persuaded Spahn to permit "the Family" to live at his ranch. Manson ordered the Family women to have sex with the then nearly blind 80-year-old. The women also acted as seeing eye guides for Spahn. Spahn nicknamed all the Manson girls—Squeaky, Sadie Mae, Ouisch, etc. . According to Manson Family member Paul Watkins, notorious Mansonite Lynette "Squeaky" Fromme got her nickname because of the sound she made when Spahn ran his hand up her thigh. Family member Charles Watson has written that his own nickname, "Tex," was given to him by Spahn, who recognized his Texas accent.