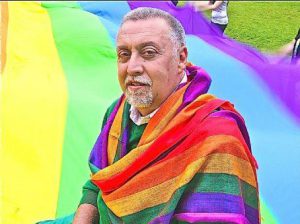 Gilbert passed away on March 31, 2017 at the age of 65 in New York City, NY. Gilbert's cause of death was arteriosclerosis.

Gilbert Baker (born June 2, 1951 in Chanute, Kansas) is an openly gay artist and civil rights activist who in 1978 designed the Rainbow Flag, sometimes also called the Pride Flag, Gay Pride Flag, LGBT Pride Flag, or, since the early 1990s, Queer Flag, that is often used as a symbol of pride in LGBT rights marches.