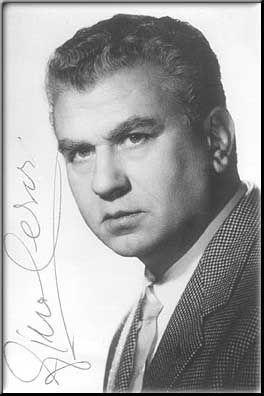 Gino CerviActive - 1937 - 1966 | Born - May 3, 1901 in Bologna, Italy | Died - Jan 3, 1974 in Punta Ala, Italy | Genres - Drama, Comedy, Romance, Historical Film, Biography by Hal EricksonActor Gino Cervi appeared in his first play in 1924, and his first film eight years later. On stage, Cervi revelled in such extrovert roles as Othello and Falstaff. In films, Cervi endeared himself to audiences all over the continent in three prewar films directed by Alessandro Blassetti: Aldebaran (1935), Ettore Fieramosca (1939) and Un 'avventura di Salvatora Rosa (1939). His biggest hits of the 1940s, The Iron Crown (1940) and Four Steps in the Clouds (1942), were likewise made by Blassetti. After the war, Cervi was seen as the communist mayor in the Don Camillo films, and as Inspector Maigret in a long-running series of TV films based on the works of Georges Simenon. He was also the principal Italian voice-dubber for Sir Laurence Olivier's film appearances. Gino Cervi was the father of producer/director Tonino Cervi and the son of Italian theatre critic Antonio Cervi.