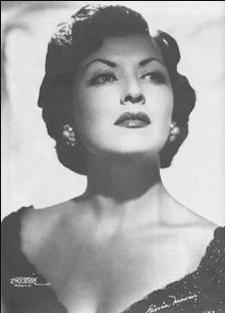 She was born in Mexico City the 19th of April 1919. Her father was Pedro Mendez Armendariz and her mother Maria Laura Ramos Luna (Laura Marin) artistic name that Gloria took and kept for her actress career. Her parents were not married but even if her father gave her his last name she kept her mother's last name because she grew up with her and did it in order to honor her for all her efforts. She had two brothers and one sister Alvaro, Guillermo and Maria Luisa "Lili Marin" She was raised in Mexico and lived most of her live in Mexico City. Her first performance was at the age of five in a "carpa" tent, where her mother used to play the piano after the hard times of Mexican Revolution. The principal singer did not show up so she jumped up to the stage and asked the musical director to play "La Mocosita" an Argentinian tango, she was missing a tooth so the audience went crazy when they listened to the little girl singing and sssisssing, they loved her. Her first artistic name was "La pequeña Glorina" The little Glorina. She performed in small theaters all over the Mexican Republic with great actors as "Cantinflas" and started her filming career with "Cantinflas" el "Chaflan" and some others having small parts until the year 1941 when she had her first big success in "Ay Jalisco no te rajes" Jalisco don not breakdown where she met her true love Jorge Negrete with whom she lived from 1942 to 1952. She performed for almost sixty years and filmed over 100 pictures. She was one of the most famous and beautiful actresses in Mexico. Married to Jorge Negrete and later to Abel Salazar, had one daughter, Gloria v*rginia Guadalupe Ramos Luna.She died on the 13th of April of 1983 at Hospital Espanol in Mexico City at the age of 63.