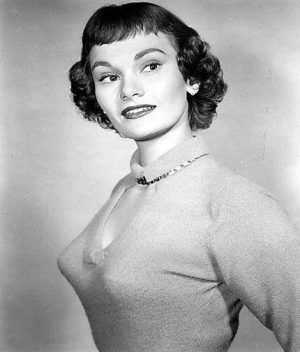 Gloria passed away on September 19, 2000 at the age of 69 in Glendale, California, USA. Gloria's cause of death was kidney failure.

Gloria Talbott was an American film and television actress. Her sister, Lori Talbott, also became an actress. After leaving school, Talbott formed a dramatic group and played "arena"-style shows at various clubs. She stopped acting following her first marriage, and resumed after her divorce, working extensively in film and television.
Talbott worked in film on a regular basis during the 1950s. She appeared in Crashout (1955), the Humphrey Bogart comedy We're No Angels (1955), Lucy Gallant (1955), and All That Heaven Allows (1955).

She later became known as a 'scream queen' after appearing in a number of horror films including The Daughter of Dr. Jekyll (1957), The Cyclops (1957), I Married a Monster from Outer Space (1958), and The Leech Woman (1960). Her final film role was as Bri Quince, the love interest in the 1966 Western film An Eye for an Eye.
Talbott's multiple television credits also includes the syndicated Adventures of Superman, The Range Rider and The Cisco Kid, the NBC western anthology series Frontier, and the syndicated western-themed crime drama, Sheriff of Cochise with John Bromfield. She appeared in the 1956 episode "The Singing Preacher" of the religion anthology series, Crossroads, and in the fourth episode of the first season of Gunsmoke that same year, entitled "Home Surgery", appearing later in the season episodes "Cody's Code", and "The Cousin."