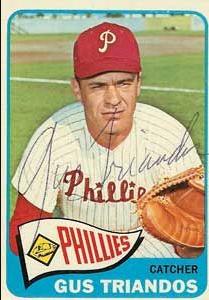 Gus Triandos (July 30, 1930 – March 28, 2013) was a Greek American former professional baseball player. He played in Major League Baseball mostly as a catcher but also played as a first baseman for the New York Yankees, Baltimore Orioles and the Detroit Tigers of the American League and the Philadelphia Phillies and Houston Astros of the National League. He batted and threw right-handed.