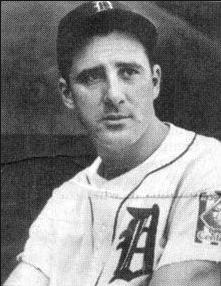 Henry Benjamin "Hank" Greenberg (born Hyman Greenberg; January 1, 1911 – September 4, 1986), nicknamed "Hammerin' Hank," "Hankus Pankus" or "The Hebrew Hammer," was a former American professional baseball player. He played in Major League Baseball (MLB) primarily for the Detroit Tigers as a first baseman in the 1930s and 1940s. A member of the Baseball Hall of Fame, he was one of the premier power hitters of his generation and is widely considered as one of the greatest sluggers in baseball history. He had 47 months of military service including service in World War II, all of which took place during his major league career.