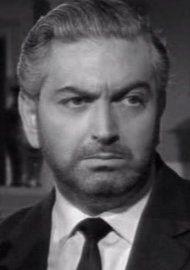 Harold Kasket (26 July 1926 – 20 January 2002) was a British actor in films and later TV from the 1940s. Kasket usually played Arabs or mainland European types in many films and TV programmes such as Maigret, The Saint, Danger Man, Z-Cars, Department S and The Tomorrow People. His last role was in the TV mini series War and Remembrance (1988). He died in his native London.