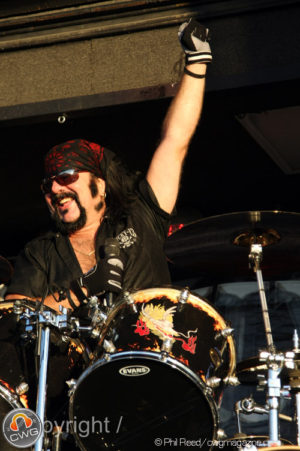 Vincent Paul Abbott, also known as Vinnie Paul, was an American musician, songwriter and producer, best known for being the former drummer, and co-founder, of the heavy metal band Pantera. He was a member of Hellyeah. He also co-founded the heavy metal band Damageplan in 2003 with his younger brother, Dimebag Darrell.
Paul formed the heavy metal band Pantera in 1981 with his brother Dimebag Darrell (then known as Diamond Darrell) and Terry Glaze on guitars, bassist Tommy D. Bradford, and vocalist Donnie Hart. Upon Hart's departure, Glaze assumed vocal duties. In the summer of 1982, Bradford left the band and was succeeded by Rex Brown. The band released three albums with that lineup.

Paul has said that his biggest drum influences are Peter Criss of KISS and Tommy Aldridge—also mentioning Bill Ward, John Bonham, Mikkey Dee, Alex Van Halen, and Neil Peart.
On June 22, 2018, Paul died in Las Vegas, Nevada, at the age of 54. News of his death was initially released on the official Pantera Facebook page with no cause of death listed, stating only his association with bands Pantera, Damageplan, and Hellyeah along with a statement requesting that the privacy of his family be respected. Five days before his death, Paul's final performance took place at The Vinyl at the Hard Rock Hotel and Resort at Las Vegas.