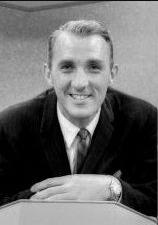 Jack Leslie Clark (November 25, 1925 – July 21, 1988) was an American television game show host and announcer. He is best known for hosting The Cross-Wits, and as an offstage announcer for Wheel of Fortune. On the latter, he succeeded original announcer Charlie O'Donnell and held the role from 1980 until his death in 1988.