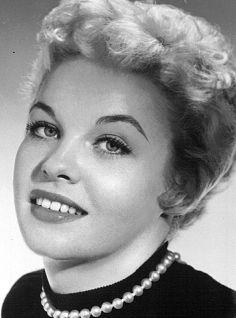 Jaye is alive and kicking and is currently 90 years old.
Please ignore rumors and hoaxes.
If you have any unfortunate news that this page should be update with, please let us know using this .

Does Jaye P. Morgan Have the coronavirus?

Sassy, dusky-voiced entertainer Jaye P. Morgan was not always so sassy, but today this is for which she is fondly remembered. She was born Mary Margaret Morgan in 1931 and began performing at an early age for family and friends. She eagerly entertained at school assemblies and, when she graduated from Verdugo Hills High School (California) in 1949, left to seek her fame and fortune on the cabaret circuit.
She quickly got a regular singing gig with the Frank De Vol Orchestra and was soon charting her recordings. She first hit big with "Life Is Just a Bowl of Cherries" in 1951. Other hits to follow were "The Longest Walk" and "That's All I Want from You". The now-popular song stylist soon took to TV, making her debut as a regular vocalist on Stop the Music (1949). She was a consistent guest performer on all the best variety showcases, including Perry Como and Ed Sullivan's shows, and in 1956 even managed to hostess her own variety program, The Jaye P. Morgan Show (1956), accompanied by her singing siblings "The Morgan Brothers (Duke, Bob, Charlie and Dick).

From 1976 to 1978, Morgan was a regular panelist on the popular game/variety show The Gong Show, from which she was fired for flashing her breasts. She also appeared on Rhyme and Reason and Match Game and in the 1980 "behind-the-scenes" movie version of The Gong Show. She also appeared on the Playboy Channel game show Everything Goes, and with her former Gong partner Jamie Farr on Hollywood Squares Game Show Week II in 2004.
Morgan appeared in the 2002 George Clooney–directed film Confessions of a Dangerous Mind, a fictionalized version of the life of Chuck Barris, creator of TV game shows The Gong Show, The Dating Game, and The Newlywed Game.