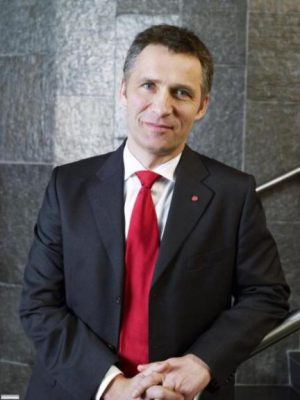 Jens is alive and kicking and is currently 63 years old.
Please ignore rumors and hoaxes.
If you have any unfortunate news that this page should be update with, please let us know using this .

Does Jens Stoltenberg Have the coronavirus?

Jens Stoltenberg is a Norwegian politician who is the 13th Secretary General of NATO. He served as Prime Minister of Norway from 2000 to 2001 and again from 2005 to 2013. In March 2014, Stoltenberg was appointed by NATO's North Atlantic Council to be the treaty organization's secretary general and chairman of the North Atlantic Council, succeeding Anders Fogh Rasmussen. Stoltenberg assumed his position on 1 October 2014.
Stoltenberg was born 16 March 1959 in Oslo, Norway, into the Stoltenberg family, whose name is derived from Stoltenberg in northern Germany. The family is believed to have emigrated to Norway in the 17th century. His father, Thorvald Stoltenberg (1931–2018), was a prominent Labour party politician who served as ambassador, as defence minister and as foreign minister. His mother, Karin Stoltenberg (née Heiberg; 1931–2012), was a geneticist who served as state secretary in multiple governments during the 1980s. Marianne Heiberg, married to former Foreign Minister Johan Jørgen Holst, was his maternal aunt. Jens lived in Serbia from 1960 to 1963 while his father was Ambassador to Yugoslavia.

Stoltenberg is married to diplomat Ingrid Schulerud and they have two children: a son, Axel Stoltenberg (born 1989) who is studying Chinese at the Shanghai Jiaotong University and daughter Anne Catharina Stoltenberg (born 1992) who is a part of Smerz, a pop music duo signed to XL Recordings.
In August 2013, Stoltenberg said on his Facebook page that he had spent an afternoon working incognito as a taxi driver in Oslo. Stoltenberg said he had wanted to "hear from real Norwegian voters" and that "taxis were one of the few places where people shared their true views." He added that, before driving the taxi, he had not driven a car in eight years. The event was videotaped in a hidden camera fashion, and released as a promotional video by the Labour party for the election campaign. It was later confirmed that 5 of the 14 customers were paid and recruited by the production company that produced the event for the Labour party. None, however, knew they would meet Stoltenberg.