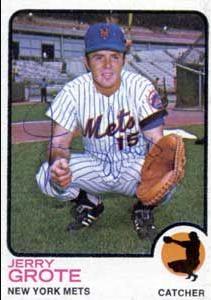 Gerald is alive and kicking and is currently 79 years old.
Please ignore rumors and hoaxes.
If you have any unfortunate news that this page should be update with, please let us know using this .

Does Jerry Grote Have the coronavirus?

Gerald Wayne Grote (born October 6, 1942) is an American former professional baseball player. He played the majority of his Major League Baseball career as a catcher for the New York Mets and was regarded as one of the best defensive catchers of his era.
In a sixteen-year major league career, Grote played in 1,421 games, accumulating 1,092 hits in 4,339 at bats for a .252 career batting average along with 39 home runs and 404 runs batted in. He ended his career with a .991 fielding percentage, which at the time of his retirement was eighth highest all-time among catchers. On April 22, 1970, Grote set a major league record with 20 putouts in a game when Tom Seaver threw 19 strikeouts against the San Diego Padres. He is the Mets all-time leader in games played as a catcher (1,176). Grote caught 116 shutouts in his career, ranking him 15th all-time among catchers.

Grote called the pitches for some of the most outstanding pitchers of his era, including Tom Seaver, Jerry Koosman, Tug McGraw, Nolan Ryan, Tommy John, Don Sutton, and Dan Quisenberry. He possessed a strong and accurate throwing arm against opposing baserunners. Hall of Fame inductee Lou Brock found Grote to be one of the most difficult catchers on which to attempt a stolen base, and though Hall of Fame catcher Johnny Bench was the perennial Gold Glove winner during their careers in the National League together, Bench once said of Grote, "If Grote and I were on the same team, I would be playing third base."
Grote has three children, Sandy, Jeff and Jennifer and six grandchildren. Grote and his wife, Cheryl, were married on November 16, 1997. They met in San Antonio, Texas and moved to Belton, Texas in January 2008. He is the step-father to Cheryl's triplets, Laurel, Joseph and Jacob and step-grandfather to her two grandchildren.