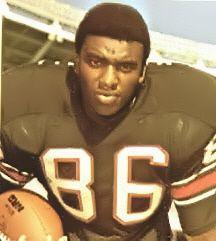 Jim Mitchell was an American American football player who was born on October 19, 1947.