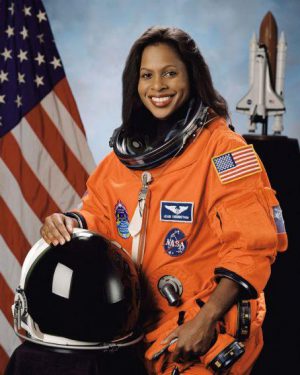 Joan is alive and kicking and is currently 57 years old.
Please ignore rumors and hoaxes.
If you have any unfortunate news that this page should be update with, please let us know using this .

Does Joan Higginbotham Have the coronavirus?

Joan Elizabeth Higginbotham (born August 3, 1964) is an American engineer and a former NASA astronaut. She flew aboard Space Shuttle Discovery mission STS-116 as a mission specialist.
Selected as an astronaut candidate by NASA in April 1996, Higginbotham reported to the Johnson Space Center in August 1996. Since that time, she had been assigned technical duties in the Payloads & Habitability Branch, the Shuttle Avionics & Integration Laboratory (SAIL), the Kennedy Space Center (KSC) Operations (Ops) Support Branch, where she tested various modules of the International Space Station for operability, compatibility, and functionality prior to launch, the Astronaut Office CAPCOM (Capsule Communicator) Branch in the startup and support of numerous space station missions and space shuttle missions, the Robotics Branch, and Lead for the International Space Station Systems Crew Interfaces Section.

Higginbotham was originally assigned to the crew of STS-126 targeted for launch in September 2008. On November 21, 2007, NASA announced a change in the crew manifest, due to Higginbotham's decision to leave NASA to take a job in the private sector. Donald Pettit replaced Higginbotham for STS-126.
In 2007, Higginbotham received the Adler Planetarium Women in Space Science Award.