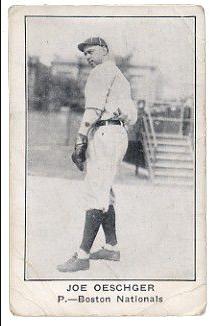 Joseph Carl Oeschger (May 24, 1892 – July 28, 1986) was an American pitcher in Major League Baseball who played 12 seasons from 1914 to 1925. After starting his career with the Philadelphia Phillies, Oeschger was traded to the New York Giants. He was soon traded to the Boston Braves, where he pitched his best seasons.