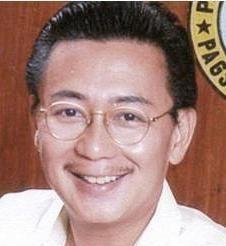 Jorge is alive and kicking and is currently 58 years old.
Please ignore rumors and hoaxes.
If you have any unfortunate news that this page should be update with, please let us know using this .

Does Jorge Estregan Have the coronavirus?

Emilio Ramon Pelayo Ejercito, commonly known as ER Ejercito and popularly known by his official on-screen names Jorge Estregan, George Estregan Jr. (sometimes spelled Jorge Estregan Jr.) and Jeorge "ER" Ejercito Estregan (or simply Jeorge "ER" Estregan), is a Filipino actor currently serving as the Governor of Laguna.
Prior to his election as governor, he previously served as mayor of Pagsanjan, Laguna. He is the son of actor George Estregan and the nephew of former President Joseph Estrada.

He is married to actress and current Pagsanjan Mayor Maita Sanchez (Girlie Ejercito in real life). They have 4 children: Eric Ejercito (born 1987), Jet Ejercito (born 1989), Jerico Ejercito (born 1992) and Jhulia Ejercito (born 2002).
On May 27, 2014, the Commission on Elections unseated Ejercito after alleged overspending during the campaign for the 2013 midterm elections. 3 days later his uncle, Mayor Estrada, convinced him to step down.